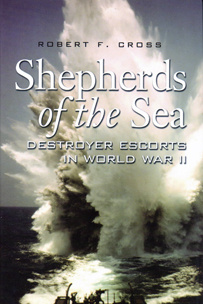 “Shepherds of the Sea, Destroyer Escorts in World War II”

This compelling tale of courage, heroism, and terror is told in the words of ninety-one sailors and officers interviewed by the author about their World War II service aboard fifty-six destroyer escorts. They reveal many never-before-told details of life at sea during wartime and, along with information found in secretly kept war diaries and previously unpublished personal photographs, add important dimensions to the official record. Unseasoned teenage recruits when they first went to sea, these sailors were led by inexperienced college boys more accustomed to yachts than warships. Their ships were untested vessels, designed by a man with no formal training in ship design, and which many viewed as a waste of money. Yet, as Cross points out, these men are credited with helping turn the tide of the war in the Atlantic as they singlehandedly sank some seventy U-boats and captured U-505, the only German submarine taken during the war and the first enemy vessel captured by Americans at sea since the War of 1812. In the Pacific, the destroyer escorts fought in every major battle, side-by-side with Allied battleships and destroyers.

But this story is not just about battles. It is also about American genius, hard work, honor and growing up in the Great Depression. The author provides eyewitness details about the historic first step taken to end racial discrimination in the military as African-Americans stepped aboard the destroyer escort USS Mason as full-fledged sailors for the first time and earned a Navy commendation of heroism in the Battle of the Atlantic—presented to the surviving crewmen fifty-one years later. Readers also learn about an ingenious invention when a sailor breaks his silence about a secret weapon tested aboard his destroyer escort that rendered a new German radio-controlled glide bomb useless.