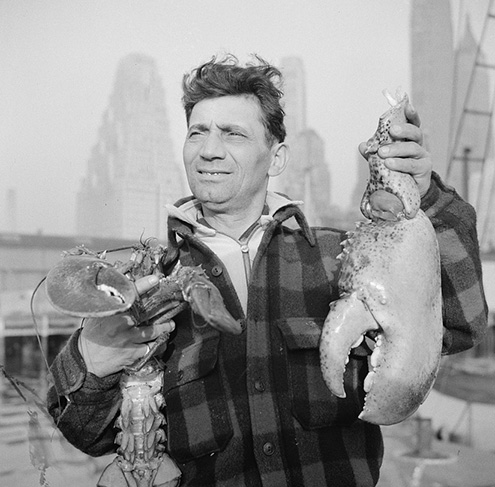 A dockworker holds giant lobster claws at New York
City’s Fulton Fish Market in 1943. Fulton Fish Market workers, like stevedores along other East Coast seaports, were keeping an eye out for any signs of Nazi saboteurs who might be trying to come ashore. © Gordon Parks, Library of Congress

During World War II, German U-boats were sinking thousands of Allied and merchant ships in an effort to control the Atlantic Ocean—and Hitler’s men were winning that war. Americans watched in horror from shore as U-boats torpedoed merchant ships, which exploded and burned in the nearby distance. Even more alarming, East Coast residents—and the White House—feared that Nazi saboteurs would come ashore to destroy America’s seaports, critical to winning the war. In fact, German saboteurs did reach American soil in Long Island, Florida, and Maine. President Franklin Roosevelt also suspected German spies were already in the United States, providing vital aid and intelligence to Germany.

In his upcoming book, the author will explore the important role of America’s seaports and the danger facing them that was lurking just offshore. The author currently is interviewing those with recollections of activities in and around East Coast seaports during the war. He would welcome hearing from those with memories of those dangerous days along America’s waterfront. Click here to connect with the author. 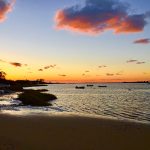 The sun sets on Polpis Harbor.